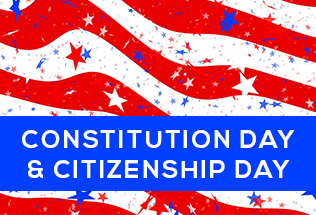 Add to my Google Calendar

On Constitution Day and Citizenship Day, an event which falls during Constitution Week, many people in the United States recognize the anniversary of the nation’s constitution and the efforts and responsibilities of all citizens. With regard to the nation’s constitution, in the summer of 1787 delegates convened in Philadelphia to create “a more perfect union” and to craft the country’s constitution. They worked to develop a framework that would provide balance and freedom, taking into account federal and state interests, as well as individual human rights. The delegates signed the Constitution of the United States on September 17 that year. By June 21, 1788, the constitution was effective, having been approved by nine of the 13 states.

With regard to recognizing citizens, newspaper magnate William Randolph Hearst advocated a day to celebrate US Citizenship in 1939. In 1940 the Congress created “I Am an American Day” to be celebrated in the third Sunday in May. On February 29, 1952, President Harry Truman signed into law “Citizenship Day”. It was established to replace I am an American Day. On August 2, 1956, the Congress requested that the president proclaim the week beginning September 17 and ending September 23 of each year as “Constitution Week”. One more change was made to the event when a federal law enacted in December 2004 designated September 17 as “Constitution Day and Citizenship Day”.