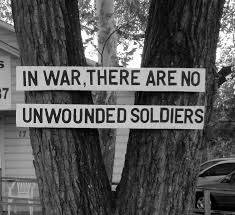 I met this tall and imperious US combat veteran at Saddleback Church: The mega- church created by Rick Warren, the author of the best seller A Purpose Filled Life. I began attending the church’s veterans meetings. The veteran who took me there was Greg, a three tour Vietnam War Army veteran. He was well over six feet tall and had a prophet’s beard.

Greg had lived in trash dumpsters since his honorable discharge in 1973. He lived for just one reason when he returned ‘home’ to the States: to stay drunk. The police knew Greg well. As a courtesy, every Christmas they would arrest Greg so that he could get medical attention and a good meal in the county jail. But in 1990 Greg had a life changing experience. On Christmas day 1990, Greg, decorated Vietnam War veteran, was arrested by the Tustin Police Department. They knew that he was harmless. Sometimes he broke into abandoned buildings, urinated in parks or fell asleep on bus benches. But he always showed the police respect and never caused any trouble when they took him into custody. They took Greg to the Orange County Jail. Greg was grateful. He always looked forward to this annual Christmas arrest. He got to see a doctor, dentist, get a shower, a cot, blankets and a warm meal.

The jail doctor knew Greg from frequent visits over the years. The doctor had been monitoring Greg’s liver. This year he gave Greg the news that the doctor had known was inevitable. Greg told me that this is what he was told: “Greg, you are going to die soon. Your liver is destroyed. I am going to have the Sheriff release you. Go and get a bottle and then have your last drink. You probably won’t live through the week.”

Later that day, Greg found an abandoned gas station and broke a window to get inside. He had panhandled for enough money to buy a fifth of vodka. But as he sat on the floor, opened the metal cap and lifted the alcohol to his lips, Greg had a vision. He told me that he suddenly saw Jesus Christ appear in the dilapidated station with him. Jesus held out an arm. “Take my hand. I will save your life and use you to save the lives of many others.” Greg never drank that bottle.

And so when I first met Greg, he was not the person I have just described. He was a supernova! His countenance was brilliant. He was the embodiment of God’s love and joy. Greg was a transformed person. He had been completely sober ever since Jesus appeared to him. He now was an elder in a local recovery church and a regular preacher at the county Rescue Mission.

Greg was also the founder and leader of the Saddleback Church veterans group. Every year he found enough funding to take Vietnam veterans like himself, who were having difficulty reintegrating to civilian life after the trauma of Vietnam, back to the bases at which they were stationed ‘in country.’ This was amazingly therapeutic for them. One of the Vietnam veterans that went on these trips had been blown up on his third day in Vietnam. Both of his legs and an arm were blown off and he lost an eye. He was 18 years old when it happened, but he was 40 when Greg took this US veteran back to the outskirts of the village where this had occurred. Of course, for the last 22 years this Army veteran had lived in a motorized wheelchair. When they showed up at the remote village the sight of this elaborate wheelchair attracted a lot of attention. An elderly woman came up and began asking questions. Then she went to her hooch and returned with a US Army helmet. It had that veteran’s name still visible on it. She had recovered it after the explosion that ripped his truck apart and used it as a flower planter in her home since that fateful day. That veteran and this former enemy hugged and cried. They were both sincerely sorry for the suffering each had caused to the other and their loved ones.

Greg was not a public speaker. He could talk forever with veterans, alcoholics and substance abusers one by one. But Greg was nervous when he had to get on stage. I had been a preacher for many years, so I was comfortable speaking in front of groups. Greg and I formed a bond. We traveled together from here to there sharing Greg’s testimony and my calls to repentance and a new life. The Assembly of God Church sponsored Greg as a speaker and sent him across America to their churches and rallies. They even gave Greg a scholarship to earn a Master’s degree in Theology at Vanguard University, their college in Southern California. Greg and I were as close as any brothers have ever been.

In 2004, two Vietnamese young adults who were members of a church Greg planted outside Saigon invited him to be the Master of Ceremonies at their Christian wedding. It was a secret event, because belief in Christ is punishable by imprisonment in that country. And so this celebration was held in the midst of a jungle to protect those who attended from prosecution. Unexpectedly, as Greg was ministering on the temporary stage a thimble of alcohol was offered to him, as part of the traditional Vietnamese ceremony. He paused for a moment. He had not tasted any alcohol for more than a decade. But he decided not to interrupt the wedding and drank the very small amount.

In AA it is taught that alcoholism is a ‘progressive disease.’ So although Greg had not tasted any alcohol for years, that simple thimble released a generation of unsatisfied desire. That night, after the Christian wedding, Greg went into Saigon. He bought alcohol. Then he purchased drugs. Then he purchased prostitutes. Greg died a few months later from a massive overdose. There was no way I could stop him. The Vietnam War finally caught up and killed him.

My life has been dedicated since to helping as many US veterans as possible to avoid this same fate.