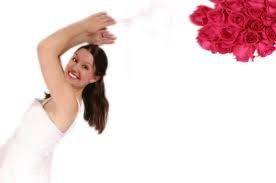 Neither her parents or mine would agree to our being married. But Zaza was 18 and I was 19, so we drove to Vegas and did it ourselves. But we never had a reception or party. And Zaza never got to throw a bouquet.

After Vegas, we drove up the coast of California. We only had a couple of hundred dollars saved up for a honeymoon, so we were spending as little money as possible. We decided to just camp out. As we were going through the gorgeous town of Santa Barbara, Zaza suddenly had a recollection. “Mark, turn here!” I shot off the highway and up a ramp towards Montecito. Hidden among Oak trees and hills covered with sage lay hundreds of hidden away cottages and mansions too. “My father took our family to a camp grounds up here, I think, when I was little. Maybe we can spend the night there.”

After touring around and trying different roads, Zaza got us to the entrance of a place with a park gate. We figured that was the place. There was a modest, middle-aged woman inside. “Hello,” I said and smiled. Then Zaza leaned in and excitedly explained, “We just got married and we’re on our honeymoon! This is our first night. Do you have anywhere that we can stay?”

The meek woman in the booth, gave us a brief quizzical and somewhat confused look. Then she replied, “Oh, well, congratulations! God bless you both! Just a minute, please let me make a call and see what we can do.”

A few minutes later, she opened the booth window she had closed while on the phone. “How wonderful that you came. I just asked the Mother Superior and she says that we would be glad to have you as our guests. She is even giving you her very own room!”

Now we were the ones with the confused and somewhat dumbfounded looks. “Mother Superior?” Zaza and I asked in unison.

“Yes.” Answered the sweet little lady. She is actually just leaving for another Nunnery in Los Angeles for a few days, and she says that she would be honored to have you take her room while she is gone.”

“This is a convent?!” I blurted-out, incredulously.

“We are the Sisters of Saint Mary.” She replied, proudly. The Church purchased and renovated this property several years ago. And now we have 35 sisters living here and working together to bring honor to God.” — “Let me introduce myself. My name is Sister Joan.” Then she got out of the gate house, into a golf cart and asked us to follow her.

There was not even enough room for me to turn the car around and get out, until I drove down the narrow, shady, Oak lined lane to what was once a mansion built by a billionaire in the early 1920’s. It wasn’t just one home. It was many. Some were tucked away beneath darkening lanes leading up a hill into a forest of immensely crowded and ancient, green trees.

Zaza and I followed Sister Joan as she led us up a beautiful Spanish staircase to the Master bedroom: The Mother Superior’s private residence. It was just a large bedroom with a full bathroom. The bed seemed to have come from the original monks like Father Junipero Serra, that founded all the California missions in the 1500s. It was massive, with towering ornately engraved bed posts, and a canopy of Jesus descending from heaven looking down from above the mattress.

Undeterred, Zaza and I persevered beneath that holy image, consummating our marriage. Yes, we were both virgins. But not anymore. It was fun!

The next morning, as we walked around the garden-like pathways of the convent, occasionally we would pass a group of murmuring nuns. Every time, we would hear them twitter and giggle after we walked by. It was cute. And a little bit awkward.

When we got back to our room, the linen had been changed, the room cleaned, and an envelope was on the perfectly made bed. “Please Accept Our Invitation,” was written on it. Zaza and I opened it, curiously. In magnificent, fresh hieroglyphic script, was written: “The Sisters of Mary would be honored to have you as our dinner guests this afternoon at 5 PM, in the White Chapel. We pray that you can attend. Blessings to you both, Sister Joan.”

The chapel was a white pine, narrow, simple church, beneath a bower of huge Oak limbs, within a glen of sunlight. Inside was a stretch of picnic tables and benches lined in a row. The table was clothed in white linen and decorated with nosegays of flowers from their own gardens, interspersed with tall, lighted candles. Fine china plates, saucers and cups, and silver tableware lay in straight lines at the tables’ borders. At the head of this lengthy and enchanting display were two tall, ancient chairs from conquistadors’ times, where Zaza and I were seated.

We delighted ourselves in a sumptuous meal, music, singing and much giddy laughter from our hosts, who seemed even more delighted then even ourselves.

After our joyous dinner, two nuns placed flowered wreaths unto our heads, and Zaza was given a full bouquet of flowers. While we were receiving these gifts, all the other sisters filed into two lines outside to greet us as we left.  When Zaza and I stepped out and stood above them on the porch, I hesitated, seeing their assembly below, not being sure what we were to do next. Make a speech? Just give a fond thank you and farewell? But before I could decide, Zaza turned her back to them and tossed her bouquet behind her and down, into the crowd of nuns. Everyone of them leapt like eager gazelles to be the first to catch it! Actually, there was really quite a ruckus.