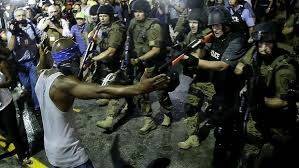 Blacks make up 12% of the US population, yet more than half of them are incarcerated in US prisons!  How can this be explained? Blacks are 5 times more likely to be arrested than Whites. Is this because other races are more moral and have greater intrinsic virtue? Of course not! The belief in equality of all human beings and US citizens is the foundation of our nation and its Constitution.

The American Black race, its culture and society, needs our concerted effort to finally bring them into the same world and reality as many of the rest of us experience: a world of opportunities, productivity and prosperity. The dependence on Welfare in Black communities has been a well-intentioned but terrible mistake. It was meant to be a temporary stop gap until we instituted a strong foundation of education and employment opportunities in Black neighborhoods. Instead, it has become a destructive way of life for generations

The lack of such opportunities in Black neighborhoods is abominable! Prostitution, crime, drug and alcohol abuse, violence and worse is the result when any population of people are deprived of means to support themselves and their families. When any class of humans is subjugated and deprived of means to live a life of productivity and achievement; when all the doors are closed; when hope vanishes, unimaginable fatigue and depression sinks into every fiber of their being. Many turn to alcohol and drugs to alter that state of consciousness and to feel better. But it takes money to buy these mood changers. Prostitution and crime are the fastest means of getting the cash to make life seem a little better than it really is. Hence, an endless, vicious, downward spiral perpetuates.

I serve US veterans, regardless of their race, creed or color. The most important thing they need to have stable, productive lives, when returning to the civilian world, is sustainable employment. The biggest hindrance to them acquiring it is a lack of proper job training or education. Fortunately, our government and a myriad of businesses and non-profits provide these things for US veterans. Blacks make up 20% of our Armed Forces. Most do so in order to avail themselves of these benefits. It make a huge difference!

There would be a much higher percentage of Blacks in our military but criminal records and a lack of a high school education prevent hundreds of thousands from enlisting. But should they have to do so in order to have the chances to succeed that most Whites have? Of course not.

I cannot imagine the frustration, hopelessness and anger of our nation’s Blacks. The looting, rioting, violence and disregard for law and order appears completely insane to me. My initial gut reaction is to feel angry at them for doing these things. I want to hate them. But I know better. I am mature adult and I have learned that anger is a waste of time and never accomplishes anything good. Understanding the causes and then making an effective plan to fix the problems to prevent these riots from occurring is the only reasonable attitude and action.

I have witnessed the Civil Rights movement from the 1950s to now. I have watched the immense changes in America’s Black culture and society. I am a 64 yr. old white guy. I grew up in a ‘liberal’ town in Laguna Beach, CA. We had a small population of Blacks. The boys played on all of our city’s and school’s sports teams. That how I met them, having a great time competing on athletic fields. And I dated two Black girls who were in my classes, Iola Oliver and Lisa Parker. – It never occurred to me to dislike them because their skin was darker than mine. That has always sounded utterly stupid to me.

In the 60’s I watched Dr. Martin Luther King and the Civil Right marches on TV. I was hitch hiking the day he was shot. A middle aged Black woman picked me up and told me what had just happened. Then she pulled out a gun and said she was going to kill me. I talked her into letting me out instead.

I became a school teacher in Watts, a major Black township in Los Angeles. Out of 235 students in my classes, I had 3 White kids. All the rest were Black and Hispanic. I taught there because I wanted to help them. I thought I could change their futures for the better. Three Black gangsters walked in to my English class one day, drew their pistols and pushed the barrels against my skull. My class laughed uproariously at the prospect of watching my death. Once again, I was able to talk myself out of this situation, but I quit the next day. – I cannot imagine that happening, nor the class having that same reaction in a White school.

There is a major difference in the Black experience and the White experience. This is also same for the Hispanic, Jewish and Asian cultures. We are all different and all alike. I just wish that we would all get along and live together in peace and brotherly love. But that takes action and sacrifice. It is time for us to remedy this situation.

Our Black fellow citizens need our help. Their youth are caught in a nightmarish cycle of hopelessness and violence. Instead of us turning away in disgust and horror at their rioting and looting, let’s seek compassion and understanding, instead.

America needs a robust economy! And every American must benefit from it. This should be the Number One Priority in our nation. It will solve a multitude of ills. Obviously, our Black and Hispanic citizens should be included. For America to be truly be ‘One Nation under God,’ we must become God-like. And we must love each other, care about our neighbors, and lift up the less fortunate.