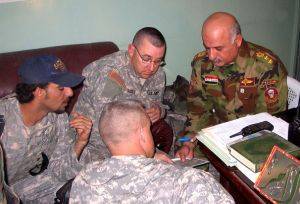 CHARLOTTE — Phil Foster survived nearly 350 combat convoy missions while serving in the Army in Iraq, and the experience has taken its toll. He suffers from post traumatic stress disorder and is on an antidepressant and sees a psychologist on a regular basis.

Foster, a former Independent Tribune employee, is now a colonel in the Army Reserves. He served in Iraq from September 2006 to January 2008, often going out on convoys in a Humvee, knowing that he and his fellow soldiers would be targets.

“You wouldn’t be out the gate five minutes and AK-47 rounds would start pinging off. Well they can’t penetrate a Humvee, they were just harassing you,” Foster said. He said the big fear was running across improvised explosive devices.

“The reason we were so hypersensitive is if you are driving down the road and there’s a pile of garbage there that doesn’t look right you stop, because they put IEDs under them,” Foster said. “Or if you saw a box on the side of the road that didn’t look like it belonged you stopped. So you are hypersensitive to look for anything that looks out of place.”

It’s a mindset that helps Foster understand fellow veterans who return from war and are looking for work. He is now volunteering as the chief operations officer for Hire Patriots, a program working to create a nationwide employment safety net for veterans.

Hire Patriots operates a career job board that allows employers to post jobs in order to recruit veterans. The site also allows veterans to post their resumes. Citizens can also post “one-day job” opportunities with a private citizen supporting a veteran by hiring for small projects, such as landscaping. Plus, the organization looks to work with veterans needing help going into civilian life.

“You’ve got these guys ready to re-enter civilian world, because if a kid goes in right after high school or college, like I did, and goes into the military, when they come back to being a civilian they’ve never had a job, per se,” Foster said. “So how do you teach them how to find what they are looking for?”

Foster has already worked on resumes for several veterans, helping take out the military jargon and make them more suitable to civilian employers. He also owns his own business, Supply Needs, a distribution company that supplies anything from water purification systems and furniture to logistics software.

It was as the owner of Supply Needs that he was contacted by Mark Baird, the founder of Hire Patriots. Baird discovered Foster on the career website LinkedIn and wanted to have Foster onboard as a North Carolina ambassador for the program. Since then Foster has been looking for businesses to post job listings on the Hire Patriots site.

For $500 a year, a company can post an unlimited number of job listings on the Hire Patriots site. Veterans can post their resumes for free. Veterans can also act as sales reps, recruiting businesses to advertise jobs on the website and earn a commission.

“You know the training. If you hire a guy to be an electrician who was an electrician in the military, you know he’s trained,” Foster said. “You know they’ll show up on time, usually early, because that’s the way they were taught. They won’t watch the clock to see when is it time to go home, they never call in sick and they always put their best effort into something. They take a lot of pride in what they do.”

Foster took his own experience in the military, handling logistics, which he later applied when he developed him company, Supply Needs, which he started in October. He handled logistics in Iraq handling distribution of fuel, ammunition, weapons and other items in theater.

Men he knew were in a Humvee that had an explosive device rip through the rear door of the vehicle, killing three soldiers and wounding another. He was at the base camp when the attack occurred.

“You don’t really get the whole details because they’re still in shock when they get back,” Foster said.

Foster said moments like those kept him on edge.

“Every time you rolled out the gate you were thinking, ‘Am I going to come back today?’” he said.

By the time Foster was sent home he was diagnosed with PTSD in 2008.

“I’d get on the highway and drive like an idiot because I wanted space. You always wanted space around us. You wanted to be away from everybody, because when you’re in Ira you don’t want to be jammed in,” Foster said. “You hear a car backfire or fireworks going off. I’m telling you, it just freaks you out.”

Foster didn’t even have time to recover before being deployed to Kuwait in 2009. By the time he got back, his wife was demanding that he get help. “My wife threatened to throw me out,” he said.

Now, Foster manages his PTSD and stays busy running Supply Needs as well as his duties with Hire Patriots. Foster knows his past can help him work with veterans when they are struggling to find work, or just dealing with their emotions from being back home.

“You’ve got that common bond of guys that have been in combat that understand each other that nobody else understands,” Foster said. “I might have a young soldier that’s losing his mind, cussing out a civilian and I can put my hand on him and say, ‘Let’s have a conversation,’ and can calm them down. Because he’s another vet whose been there talking to another vet.”

For more information, visit http://www.hirepatriots.com/. You can also contact Phil Foster at 980-475-5934 or pfoster@supplyneeds.net.