This letter is written by the son of a US veteran whose father is using HirePatriots.com in order to pay for the medical expenses for Dilon’s treatments. If you would like to pitch in and help out you can contact Dilon and his family at gregerlandson@yahoo.com. — Also, his dad Greg is looking for a job in the San Diego area. He must drive to Los Angeles everyday, and that is expensive and takes a lot of time away from his being with his family. Greg was Navy Petty Officer in charge of maintenance on ships and managed up to 300 other sailors. So he can fix anything. Take my word for it. — Mark Baird

Hi, my name is Dilon Erlandson and I recently got diagnosed with a cancer called Leukemia which is a blood cancer where you only have white blood cells instead of red because the white cells attack the red cells like they are deadly pathogens.  When I got diagnosed I had to stay in the hospital three months straight and had to get a pick-line put in my arm so that they can put fluids and blood in me and stuff like that through the three months. After the three months, I got to go home for three days and then I had to go back for treatment.

I had to keep going back for treatment every week, and one medicine that they gave me called Methotrexate made me get sores and open wounds in my mouth and it made my throat swell and I couldn’t eat or drink anything. I had to be on a liquid diet and I had to use a mouthwash that cleared it up. But I had to to be in a hospital for week or two everytime they gave me that medicine.

Then I got a really bad infection when I went into our apartment’s pool. I had to go into the hospital for three weeks because I was throwing up and everything and I was very sickly. I had to get blood and antibiotics and a lot of other stuff. I had to get surgery so they could put a thing called a port in my  chest that they can use for the three more years of treatment they say I need, instead of putting an IV in me everytime I get rushed to the hospital.

As far back as when I was 3 years old, I have been ill. But my Leukemia was not diagnosed until just a year ago. I am 18 now. I am doing a little bit better, but I can barely walk. I can’t run or jump or anything like that because of the treatment and I am still getting that medicine that gives me painful sores  in my mouth.  I can’t walk up stairs or climb up or get stuff. If I fall I can’t get up by myself. Someone has to pick me up and I still have three years of treatment to go. So I just have to wait and see what is in store for me over time.

Read more about Dilon and his family in this article that was published in People Magazine in April 2013: http://www.hirepatriots.com/people-first-initiative-2013 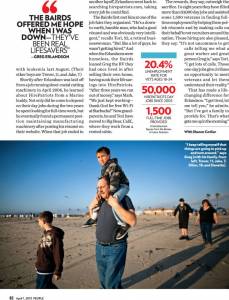