From US Navy Jeep – 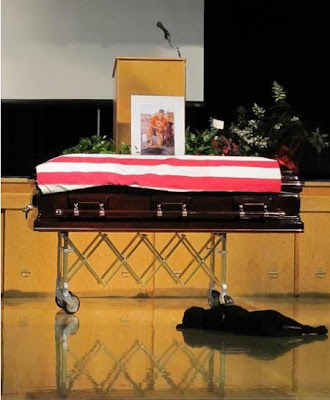 I arrived home late yesterday after spend 5 days traveling from Bagram Air Field, Afghanistan to Boston, via stop-overs in Kuwait and Ft. Benning, GA. The relief for my safe return by family & friends is obvious.

Along with the family, my  4-legged children were overwhelming joyful upon seeing me. They are the truest companions as they show unbridled joy at our daily return home, and know that we miss them when we are gone. Dogs have an inate ability to know our true emotions and they respond in like kind.

Here is another display of loyalty, and it should be no surprise to me our anyone else who values our K-9 pals for all they do to enrich out lives.

The dog of slain Petty Officer Jon Tumilson refused to leave his side during the Navy SEAL’s funeral earlier this week in Rockford, Iowa. The heartbreaking photo taken by his cousin, Lisa Pembleton, shows Tumilson’s dog Hawkeye lying by the casket.

Navy SEAL U.S. Navy Petty Officer 1st Class Jon T. Tumilson was among the 30 American troops killed August 6 when Taliban insurgents downed their Chinook helicopter with a rocket-propelled grenade. At his funeral in Iowa, his dog Hawkeye paid his last respects, walking up to the casket, lying down in front of it, and heaving a sigh.

Pembleton wrote on Facebook that Hawkeye was Tumilson’s loyal pet who wouldn’t leave his master’s side during the funeral in Rockford, Iowa.

“I felt compelled to take one photo to share with family members that couldn’t make it or couldn’t see what I could from the aisle,” Pembleton wrote.