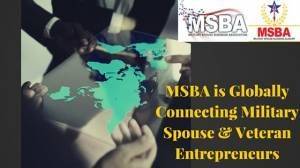 The Military Spouse Business Association, MSBA, was launched in 2006 by three military spouses that were friends discussing their challenges as mobile entrepreneurs.  MSBA offered resources and tools to encourage military spouses and Veterans, to successfully operate their business, through the military lifestyle and while transitioning.  MSBA expanded further and in 2014 the Military Spouse Business Academy, MSBAcademy, was launched.

Registered members of MSBAcademy can obtain access to resources such as peer-to-peer mentoring, business counseling available via a Small Business Incubator, legal and tax advice, Continental United States and Overseas tips and guides, a list of seminars and webinars, and mastermind groups.

MSBA promotes its members businesses to the civilian community on the local and national levels via media channels, tradeshows, exhibitions, networking events and online.

Have you heard of the Military Spouses Residency Relief Act, MSRRA?  The co-founders of MSBA approached members of Congress on an issue that not only impacted military spouse business owners but ALL military spouses, residency.  The result of the meeting was the birth of MSRRA.  MSRRA was introduced as a bill in 2007 and after three years of work via a growing online coalition, MSRRA became law on Veterans Day 2009.  MSBAcademy and MSBA volunteers are able to assist military spouse entrepreneurs with questions in regards to how residency impacts their business.

Rikki Winters volunteers as Operations Director for MSBA.  She has been a member of the Association since 2007 and owned and operated two businesses.  Rikki led over 5000 Coalition members in calls of support for the Military Spouses Residency Relief Act.

About The Author
Patrick

Even if you’re not unemployed a budget is a budget and this free book download has everything you need to start fresh and move forward. The book is only 20 pages long but it includes real life stories and forms to kick start a solid spending plan for the future. By the time you’re done with this book you will know your income and outgo by spending category plus a percentage guideline chart that will show you where adjustments may be needed. I don’t ask for any contact info, it’s a free PDF. Just click on the book cover above. Here’s what others are saying about the book: “This is a practical book full of proven strategies you can use immediately to get your financial life back under control.” ~Brian Tracy – Author, The Power of Self-ConfidenceGordon Wadsworth – Author of “Debt Free College” and “The College Trap” In reference to “The Unemployment Budget,” this has to be the number one book for getting out of debt in record time. In today’s world of fast food, fast oil changes, fast delivery and fast messaging, why not tackle your debt problems fast and move ahead quickly. Basically, that’s what you can do after reading this simple “how to” book. As a financial instructor for many years, the one tool that I used to help people get out from the bondage of debt, author Patrick Mellody has as the main focus in The Unemployment Budget. It’s explosive and it works every time. Whether you are employed or unemployed, if you’re still hanging onto never ending credit card debt and car payments, check out this new book and get rid of your debt fast.