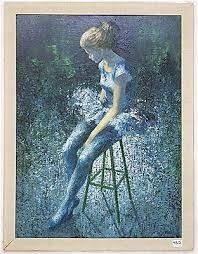 My Dad: A True Artist

When Laguna Beach was truly an “artists’ town.” When young and old creatives flocked there instinctually like birds to Capistrano, it was the North Beach of San Francisco, the Greenwich of New York and the North Bank of Paris. My father quit his senior executive job at Northrup Grumman in 1963 and moved our family to this quaint, pubescent town, abandoning his profession as a conceptual artist for the military establishment and devoting himself to producing true art.

He had been a star in California high school track in the early 1940s. His nickname was “Breeze” because of how fast he ran. His track idol was Harrison Dillard, who was the fastest high hurdler in the world, and a “negro” athlete, which was an extremely divisive issue at that time. My father idolized a black athlete when he was a teenager. That has affected me since my earliest remembrances. My first girlfriend was a “negro.” I walked her home from Kindergarten when I was 4 years old and kissed her when she would not allow me to go any further in fear of her father’s ire if he saw her with a white boy. Then he joined the Navy when Japan attacked. He served on a submarine. He has never told me anything more, except for one funny story.

Somewhere in the South Pacific on a ship that my dad was a first mate, the bugler disappeared one night. Apparently fallen or pushed off the edge of the ship. Next day, an announcement was made by the Captain, asking for the services of a bugler. My father volunteered: He had played trumpet in his H.S. band. He got the job! His only obligation was to play revelry in the morning and night. He also had to properly address by defined musical notation other ships. Soon after his elevation to this position, a ship with an Admiral aboard passed by. There was a specified, expected, required and traditional bugler’s response to a commanding officer aboard a passing ship. It was regulation US military protocol. My father, just promoted to this M.O.S. was called to the bridge in order to play the appropriate and required melody. He had no idea of what to blow. He asked the Petty Officer standing next to him. He gave him a whispered tune: ‘Da- da- da-da-da- da-. “And that is what my dad played.

The next day he was penalized for being drunk while on duty.