I used to write stories for the Laguna News Post. — And a story in the Laguna Patch this week about banned 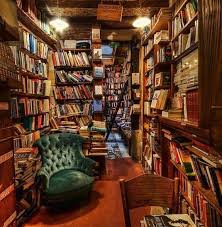 books reminded me of Dilly’s Book Store on Coast Hwy. — He also sold banned books. — OMG, It now occurs to me that this story is 50 years old! That is like someone telling me a story that happened in Laguna in 1912!

I had heard about the banned book Tropic of Cancer by Henry Miller at Thurston Jr. High. A boy in a class brought a copy. It included blatantly graphic descriptions of sex. Things I had never heard of or even knew were possible. — Of course, my pubescent mind was excited to read more.

After school, I went down to Dilly’s Book Store. It was like visiting the Old Curiosity Shoppe in Dickens. Mr. Dilly, his wife and their Collie virtually lived there. The large narrow store was filled with tall, dusty bookshelves. The shelves were filled with Classics, not with the magazines and contemporary, faddish, literary slop. In fact, one got the impression that Dilly’s Book Store was stocked only with the books that Mr. Dilly had read himself and felt were worthy of being sold in his store. And the room was always scented with the thick, pungent odor of Mr. Dilly’s always lit pipe. And to save money, the lights in the store were rarely turned on. If you selected a book from a shelf, one had to walk out into the aisle, where the light from the front windows would allow you to read.

When I entered the store, at first I thought that they were gone and had accidentally left the door unlocked. But then their beloved and blind dog came out of the darkness in the back of the store to smell me. When I cautiously reached out to pet the dog, Mr. Dilly and his wife chirped up from their stools at the counter in the back, “Don’t worry. He won’t bite.”

I followed their dog and was greeted by the elderly, educated proprietors. Mr. Dilly looked like a frumpy college professor. He wore a corduroy coat with elbow pads, a tie with a Scottish plaid, corduroy pants and loafers. His black and full head of hair was greying. But the most notable first impression was the countenance of his face. Mr. Dilly always looked thoughtfully amused. Perhaps he did not get too many 12 yr. olds in his book store.

His wife was thin and frail. And she had a countenance of perfect contentment. If there was ever a wife that loved and respected her husband, and felt completely content with her life, it must have been her. There was an aura of peace and contented reflection in that place.

They both stepped off their high stools. First, Mrs Dilly greeted me. “Hello. How are you? Is there any particular book you are looking for?” She said this to me, as if it was my grandmother asking me if I wanted a cookie. They both seemed very pleased to have me as a customer.

I did not know what to answer and stood there awkwardly for a moment. Mr Dilly took the bitten pipe from his mouth and cleared his throat. “Follow me,” he said quietly. Then he took me down each and every isle and described to me the books and authors. “Dear young learner,” was how he referred to me. Then he would give me a survey of selected authors and titles as he pulled down books, opened their pages and read his favorite passages to me. Then at the last aisle, next to the front door, he took down a book by the author I was looking for, Henry Miller, and read some passages from A Cosmological Eye.  “Thanks!” I said, as he returned his pipe to its place at the corner of his mouth and returned again to his wife and Collie in the dark recesses at the back of his precious establishment.

I was now hidden from their view. And right next to the where Mr. Dilly had taken down and then put back the book he read to me, I could see the title Tropic of Cancer. And next to it was a sequel, Tropic of Capricorn. I quickly pulled down both, stuffed them in my pants, abruptly left the store without comment, and began running down Coast Hwy. as fast as I could! — This was the first time I had ever stolen or committed a crime. My heart was trying to beat itself out of the bars of my chest. — I turned the corner at Forest Ave. and the peeped around the corner, to see if they were chasing after me. — They weren’t. I had made it.

I got home and ensconced myself in my bedroom on Holly,  three houses up from Monterey St.( By coincidence, my dad had purchased this house from Bob Boyd, the owner of the French restaurant, next door to Dilly’s. — Bob Boyd’s son now owns the Marine Room.)

After making sure that my bedroom door was locked, I began perusing the books that had so intrigued my imagination, and that had led me to commit a crime. But it wasn’t working. My conscience kept stabbing me. I felt so overwhelmingly bad. — Shortly, I got up and walked back to Dilly’s Book store. I confessed my crime and held out the books, with my head staring frightened and embarrassed at the ground.

“Keep the books!” Mr. Dilly said, blowing a huge puff of smoke. But they are probably not the reading you will enjoy. You might like them better in a few years.” Then he put an understanding arm around my shoulders and walked me back to the Henry Miller section. “Try this one. It’s my favorite.” And once again he took down The Cosmological Eye. “You will probably like this one a lot better. A lot of it is about a tramp the author met in Paris.” He handed me the two books I had stolen, plus that one.

I stood stock still and dumbfounded. I had expected to be severely reprimanded and probably sent to jail!

“Of course, we knew you had taken these books as soon as you left.” Said Mrs Dilly, who had joined her husband. “But we really didn’t mind, as long as you read them.”

“That’s because you selected an outstanding author.” Chimed in Mr. Dilly. “In fact, he is a friend of mine and visits sometimes when he leaves his cabin in Big Sur.” Then he paused for a moment, put his hand on my shoulder and made these stipulations:

“I won’t call your parents or the Police as long as you agree to do these things: You will come to our store everyday after school for the next month, and you will sweep our floors and take our Collie for a walk.”

I gave him my word and kept it. I swept their store floors for 30 days in a row. And I fell deeply in love with them and their books!