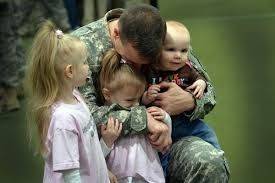 The stress of US military life: training, long deployments, and moving from base to base makes military marriages more difficult than most in the civilian world. And then there is the shock and horror of combat that so many of our veterans have experienced during America’s longest war: the “War on Terrorism,” which we are continuing to battle.

US veterans sacrifice a tremendous amount, more than almost any civilian can comprehend. Regrettably, it too often results in divorce. I have read statistics that claim 90% of our enlisted ranks deployed to combat will end up divorced after returning from war zones! – When I attend meetings of military wives on bases they refer to this devastating statistic as “the Plague.” They say that it seems like everyone on base is getting divorced and breaking up their families. –Imagine the pain and suffering of everyone, especially their children!

Then there are those souls who have been irreparably damaged by combat trauma. They live in two realities: the one we all experience, and then their own private Hell: a somewhat delusional existence that mixes their war reality with the actual reality in which they live. This too often the result when combatants return from war and attempt to resume their lives as normal. – Of course, the effects on a marriage, particularly on spouses and families that have no way of understanding what the veteran is going through, can shatter a family like throwing a thin glass onto a cement floor.

I believe that every American has the responsibility of doing something for our veterans who endure this. We sent them to war. They are our children, our neighbors, our nation’s young men and women who will shape our future. They volunteered to defend us with their bodies and their lives. Now that they have returned to the civilian world, we cannot leave them to fend for themselves. We all owe them a debt of gratitude. And we have the moral obligation to heal them from their wounds, and the to help them through the difficulties they have readjusting to a civilian life again.

I have worked closely with our nation’s veterans, especially combat veterans, since 1970, in the midst of the Vietnam War. As a pastor called to serve them, I have known many thousands of these dear American patriots. They are extraordinary citizens. And they all own a special part of my heart.

As often as I can afford it, I rent out a 4-5 star resort and fill it with such veterans and their spouses for a 3 day, all expenses paid “Military Marriage Retreat.” I keep these relatively small. 10 to 15 couples. My purpose is to create an intimate environment that enhances a peer group experience. We share and discuss various issues that they all are familiar with. Perhaps most important is how to reconnect emotionally and sexually with eachother.

I have been leading these retreats for almost a decade. It costs about $7500 to host these. We provide speakers, workbooks, entertainment and all of their meals. Plus, we do a lot of extras and give gifts to each couple. – At the end of the retreat, we hire a professional photographer to take a picture of them beneath and arbor for them to hang in their homes as a commemoration of their weekend. These are framed 3’ by 5’ pictures to hang on a wall in their home. On the back is a list of our counselors and the contact info for each. Our purpose is for them to have an immediate resource of professionals that will help them with any urgent need when necessary, without cost.

These retreats have greatly exceeded our expectations. Only one couple that has attended our weekends have divorced. (They left abruptly on the second day.)

Patriotic Hearts, our 501c3 non-profit, hosts these events. If you would like to attend, participate as a volunteer, or donate to make our next one possible, please let us know. You can write us at [email protected]. And you can donate HERE.