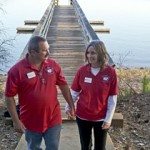 This is great news! — HirePatriots has been hosting free 3 day military marriage retreats for 6 years.  Now the VA is doing them. Like ours, theses are free too. All you have to do is to get there. — These retreats are absolutely worth it for any couple, whether they have no real problems or lots of them.

The Department of Veterans Affairs is trying a new path when it comes to caring for and healing the Nation’s wounded Veterans. Now, in addition to repairing their damaged bodies and minds, VA is attempting to go one step further and repair their crumbling marriages.

Ralph and Michelle Lynn’s marriage was floundering until, at Michelle’s urging, they attended a VA marriage retreat three years ago. Now things are different.

That’s why Craddock and another VA Chaplain, Ed Waldrop, launched VA’s very first marriage retreat three years ago at the Charlie Norwood VA Medical Center in Augusta, Ga. The retreats are conducted by VA chaplains, social workers, psychologists, and counselors who have been certified as instructors for teaching better communication skills, relationship skills, and emotional literacy skills to couples.

“We started out doing three or four retreats a year,” Waldrop said. “We got a lot of positive feedback, so now we’re up to about 11 a year. We’ve done two- or three-day retreats for over 400 couples. We’re here in Georgia, but we’ve had couples come here from as far away as Pennsylvania, Oklahoma, and Florida…all over. The retreat is free, so their only expense is transportation. If they can make it here, we get them into the program.”

The idea is gradually catching on at other VA sites across the nation. The VA San Diego Healthcare System now has a marriage retreat program up and running, while about 20 other VA medical centers are in the beginning stages of establishing their own programs.

So what exactly goes on at a marriage retreat, anyway?

“We spend about 70 percent of our time helping couples with their communication skills,” Craddock said. “When these Veterans come back from overseas, they don’t have the communication tools to talk to their spouse about their pain, their frustration, their grief. And we’re seeing this in both males and females…even the females returning from Iraq and Afghanistan want to seclude themselves. Just like the guys, they don’t want to be around crowds…they don’t want to go on family vacations or outings…”

“When we went to that first retreat, I had PTSD so bad I couldn’t even sit with everybody.”
— Ralph Lynn, former Army sniper

Both Craddock and Waldrop point to one troubled couple in particular as the perfect example of how effective their program can be at healing broken relationships.“

Ralph had been an Army sniper in Iraq,” Waldrop said. “When he and his wife, Michelle, first came to our retreat, they sat in the back of the room and wouldn’t join the group. We couldn’t get any response from them…”

“But they completed the retreat,” said Craddock. “Then, they signed up for our advanced retreat. Now they’re both certified instructors in our program. For two years they’ve been helping us teach other couples how to reconnect.”

Up Against the Wall

“When we went to that first retreat, I had PTSD so bad I couldn’t even sit with everybody,” Ralph acknowledged. “I had to sit in the back of the room, against the wall, so I could see everybody. Michelle sat back there with me. She was the only one I could trust. I didn’t trust anybody else.”

Ralph said it was his wife who convinced him to try out the VA marriage retreat. Up until then, he’d never really thought of himself as a ‘marriage retreat’ kind of guy.

“Michelle knew something was going on long before I was ready to do something about it,” he admitted. “Usually the one closest to you bears the brunt of the mess.

“I thought I was the only one going through what I was going through,” he continued. “But at the retreat I saw other couples going through the same thing…having the same problems Michelle and I were. Mainly, it was communication. We didn’t talk to each other, we talked at each other. At the VA retreat I learned that marriage is a separate entity that has to be nurtured, like a child. You have your day job. You have your spouse. Then you have your marriage…it has a life of its own.”

I Wanna Hold Your Hand

“They taught us how to listen to each other,” said Michelle. “Now we can talk to each other about what we’re feeling inside. When that happens, it brings you closer together. It feels really, really good.”

“We see some remarkable transitions at these retreats,” Ralph added. “We see couples who won’t hold hands. They won’t touch each other, or put their arms around each other. By the end of the retreat, all that changes. They’re holding hands. They’re hugging.

“Without the VA, I wouldn’t be where I am today,” he concluded. “Anything that can keep people from going through what I and my wife went through, I’m all for it.”

Michelle agreed. “These people are coming back from war zones,” she said. “They’ve shut down. They’ve experienced things no human being should experience. They don’t know how to communicate anymore because they’re used to being given commands.

“Before we did the retreat, I could talk to Ralph all day long and not get a response. I might get a nod out of him. But now we can actually have a normal conversation. That’s pretty awesome.”When VA’s marriage retreats first began, only Veterans from the Iraq and Afghanistan conflicts were being accepted into the program. Since then, VA has opened the program to anyone who’s ever worn the uniform.