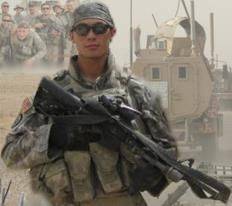 After attempting suicide in November of 2010 I decided to help fellow soldiers and their families by giving them advice on how to handle certain situations.

In 2010, I attempted suicide while still in the Army.  This is just over a year after being back from Iraq.  It was just one day and I just decided I was done.  I had tried to get help by seeing a psychologist on base who in the end decided to call me a liar.  So I had no one to talk to, and I didn’t want to seem weak to my battle buddies.  I went home and took 4 full bottles of different types of pills, drank a few beers and punched holes in the walls across my house.  All of a sudden I felt the pills kicking in and felt myself dying and quickly realized I had made a mistake and called 911.

I woke up the next day in the hospital, everything from the ambulance and hospitals I don’t remember.  My E-6 at the time was there and watched as they strapped me down to a bed and shoved a tube down my throat while I squirmed and fought.  They had to get coal into my body and I wouldn’t wake up to  drink it.  I woke up with a catheter inside me and they had told me they called my family.  They couldn’t tell my family if I was going to live through the night because they didn’t know what type of damage had been done to my kidneys.  When I woke up that morning I turned my life around.

I talk about that day because that is when I decided I wasn’t going to be another number on the veteran suicide chart helping it get larger, I was going to be a number helping lower it.  That is why I have written this guide and decided to help families understand what a soldier thinks.  My family was so upset and never understood why I had tried to take my own life, so maybe if you could understand more you can try and stop it from happening to your soldier.

Here is a link to my blog. I have written about my personal transition experience: http://wyshproject.org/blog/