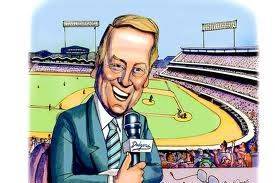 I love baseball. I grew up at a time in America when every boy in the country played baseball from the time he could swing a bat and hurl a pitch.  In 1958 the Brooklyn Dodgers moved to Los Angeles, where I lived. They played in the Los Angeles Coliseum, where the 1932 Olympics where held; and where the USC Trojans play now. A football stadium makes a weird shape for a field.  Some of the players were Duke Snider, Carl Erskine, Wally Moon, Carl Furillo, Sandy Koufax, Don Drysdale… And the announcer I listened to was Vin Scully. I was 8 years old then. I am 63 now. Vin Scully is still the Dodger announcer.  He is 86!a

Listen to anyother contemporary sports announcer. Then listen to Vin Scully. Go back and forth between anyone else and Vin Scully.  You will immediately notice the difference.  Scully’s voice rolls along with the game. He fills every void with details and stories and play-by-play as easily as water flows downstream. There is no one alive today that even comes close. He is a classic!

Scully’s view of the game was always wider than what was happening on the field in front of him. In a game in Ebbets Field in 1957, an odd series of game-related events required the Dodgers to use their third-string catcher, Joe Pignatano, in the middle of the game. Scully knew that Pignatano’s wife had recently had a baby and she was not at the game – she might not be listening to the broadcast. Not wanting her to miss her husband’s major league debut behind the plate, he suggested that any listeners who might know the Pignatano family should pick up the phone and alert them.

In the 1970’s when “free agency” came into sports, I left the Dodgers and became an Angels’ fan. Their stadium was closer to my home. And the Dodgers began buying players, instead of bringing them up through their farm teams. Neither baseball nor the Dodgers were the same. But the Angels, under Gene Autry were ‘old school.’

As a Little League coach I got to bring my team, and my son Saxon, unto the Angels’ playing field in front of the crowd. Later, he attended Mike Scioscia’s  baseball camp. Mike had been a catcher for the Dodgers, and became the longest running and most successful manager for the Angels.

But my son has grown and flown away, never to return. And Vin Scully may never broadcast another Dodger game after this year. So I am going back to the soothing voice I listened to since a young boy in Elementary school. I stayed awake far too long a hundred times listening to Vin Scully as a boy. Sometimes fatigue won and my dreams slipped in while listening to Vin Scully’s voice.  So 54 years later, I am coming home again. This year I am a Dodger fan again. And I am listening to every game, just like I used to. And I am being carried along, batter by batter, pitch by pitch, by the voice that filled my youth and its imagination: Vin Scully.