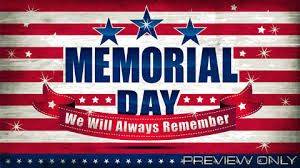 Since 9/11/01 America has lost over 10,000 Americans, 8,000+ of these citizens were those that volunteered to join the US military after that heinous attack. On May 25, 2015 we will all share a responsibility and a duty to honor these beloved men and women of our nation.

Unlike “Veterans Day” that honors all US veterans, Memorial Day is dedicated to those who have given their lives while in US military service. It is a day of remembrance for their sacrifices. It is the least that we as a nation can do.

The first Memorial Day observances started spontaneously after our Civil War. Southern women were known for decorating their war dead with fresh flowers on their graves. And immediately after the Civil War when slaves were freed, they also went about and decorated all the union soldiers’ graves to thank them.

They sang songs in Charleston, SC. It had been a city where thousands of union soldiers were kept prisoners. Many died while hoping for the war to end and to return to their loved ones. The freed slaves, along with missionaries cleaned up their burial sites. Nearly 10,000 people attended, including 3,000 children of the freed slaves. The freedmen also built a memorial arch at the entrance to the cemetery and labeled it “Martyrs of the Race Course.” The day was reported in the New York Times as the “First Decoration Day.” Black Americans recently freed from slavery announced to the world with their flowers, their feet, and their songs what the war had been about.

Following the example set by southern slaves, the North responded by creating a national holiday in 1868. The date set for the day of remembrance was May 30. It was not chosen because of any particular battle; but simply because it was a day that flowers would be in bloom. It was called “Decoration Day.” By 1878 every state in the union made this day a solemn day of remembering all Americans who have given their lives in service to our country.

America is still the light of the world’s nations. We defend the innocent and the powerless from evil dictators, regimes and terrorists. It is a noble profession to fight in defense of these peoples. America is also still a nation of faith in God. More than 83% of us profess belief in the God of the Bible. – It is critical that we all devote ourselves to honoring those who have given their lives so that others can live. God will not continue to bless a country that fails to do so.

Be sad and shed tears on this day for the grief of families, friends and loved ones of those that have fallen. Be sad for the loss of life suffered by our armed forces. But then rejoice and be glad. Their sacrifices must be honored with rejoicing too. Because of them our country is secure. Praise God! Praise them! Rejoice that such extraordinary citizens have kept America brave and free!