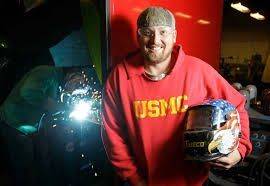 Last year, a large segment of the veteran population in America was unemployed: 574,000 of the 10.2 million men and women who once served this nation found themselves without work, reported the Bureau of Labor Statistics. The transition from service to civilian life can be challenging for several reasons, such as injuries sustained on the battleground or post-traumatic stress disorder. However, for veterans who are able to work, the right combination of skills and job opportunities can help make this change much smoother. As this data from TWS shows, the demand—and pay—for skilled welders in Texas is high. Returning servicemen and women looking for a promising career can seize the numerous opportunities Texas has to offer after just seven months of welding training.

HOW HIGH IS THE DEMAND FOR SKILLED WELDERS IN TEXAS?

Despite being the number one employer of welders in the country, Texas lacks enough skilled welders to fill positions in manufacturing, oil and natural gas extraction, and other industries. As the infographic shows, nearly 40% of job applicants failed their welding employment examinations, with one company indicating that only about 25% of its applicants passed. Consequently, the standards for quality work are falling: whereas a pipeline welder was only permitted two repairs per every 100 welds in 2005, the same welder can now fix 10% of his or her work. The shortage of skilled welders is so great one employer secured his worksite with armed guards to keep corporate poachers away from his talent.

Texas companies need skilled welders and are willing to compensate them well when they find them. The Texas Workforce Commission reported that the demand for welders is so high that wages are rising dramatically, with entry-level welders with a one-year certificate earning as much as $28 per hour. While the median annual salary for a welder in the state is more than $40,000, those with advanced training can pull in over six figures. Across the skilled labor force, wages have increased more than 40% since 2010, and welders in Texas are currently earning 8% above the national average.

TRAIN AND EARN IN LESS THAN A YEAR

The majority of the career opportunities in Texas are for skilled welders, those with comprehensive training. Technical schools can provide welding training in as little as seven months, allowing veterans to enter the field and start earning in less than a year. As the BLS noted, many employers prefer to hire welders with degrees from accredited vocational schools.

In appreciation of their service to the nation, some technical schools offer special assistance to veterans. After devoting part of their lives to protecting America, veterans can later find fulfillment in helping to construct the country.