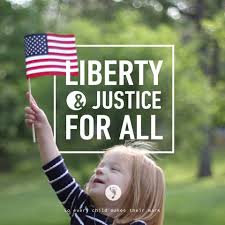 How many of us want to live in a united America, where all of us can live lives of peace, prosperity, love, and respect?  Here is how we do it.

Our country will always be divided over political issues. Americans have always been politically divided.  That is the government our forefathers created: a Democratic Republic; hence, Republicans and Democrats. However, we should always be united by the primary and guiding principles established by our Constitution and the Bill of Rights: MUTUAL RESPECT.

Right now, Americans are more divided and irreconcilable than since the Vietnam War. There is total  distrust and enmity on both sides.  And it has gotten manipulative and dirty. Politics now comes before justice.

Like most of us,  I cast my vote depending on the person and the issue.  I make up my own mind, even if my friends, family, or political affiliation disagrees. And I think most of us do the same; we make decisions according to our conscience.

For most us, our core beliefs and guiding principles are the result of our upbringing, religion and culture. The majority of Americans believe in God and righteousness. We are motivated to live a life of compassion and love for our neighbors and fellow countrymen. We believe in a life after our bodies die, where we will be either rewarded or judged for the life lived now.  Certainly, we should agree with this: Every American should be treated equally and respectfully.

The Pendulum swings back and forth in America. It always will. One block of political believers will have the power, and then, in a few years, the other party will hold the political reins. When Obama was elected the media claimed that the Republican Party was dead, claiming only 20% of Americans were still members.  But now, after Obama, the Republicans are in charge. If you have lived long enough you have seen this happen over and over again. The Pendulum swings.

We must recognize and respect eachothers’ points of view, since they are based upon their core beliefs and principles. And we should elect representatives who put Truth and Justice before politics, despite the consequences to their re-election: Citizens of sincere conscience, with no prejudices against citizens that disagree.  Our personal beliefs and practices should not be forced on other citizens.

For an example, allow me to use the explosive issue of Abortion. For most Republicans abortion is in opposition to their core beliefs. They cannot reconcile it with their religion either. Many are so passionate, that they would even give their own life to save the life of a baby about to be aborted. – Those who disagree with them can scream and yell and hurl all the insults that they want, and even pass legislation which permits them to do so, but it will have no effect on changing their minds.  Their conscience will not allow them to alter what they sincerely believe. – Of course, it is exactly the same for those on the other side of this issue. The two sides will never agree about this. Does this mean that we should hate eachother?

I am a Christian. I love many people who have entirely different beliefs and convictions than my own. Some are passionate Democrats, and some are passionate Republicans. I respect their opposing beliefs. I do not argue with them. It would be futile and only lead to anger and division.

Personally, I stay away from such debates. They are endless. The party in political power will do as they can. Then the other party will gain power and do the opposite. Instead, I concern myself with promoting understanding, mutual respect, honesty, and love. I focus on making positive changes outside of politics. I remain far from the screaming squabbling due to the swinging of the Pendulum.

Our  life is our own. Live it honestly and be true to you truly believe. And respect others who are also seeking to live with a pure conscience.  The alternative is what we have now: schisms, factions, rivalries, politics, and hatred.  The wiset man in the world once said, “A nation divided against itself cannot stand.” He also said, “I have set before you, blessings or curses, prosperity or destruction,  life or death. Choose life!” — We must grant each other the right to follow our own conscience. Freedom does not force another to violate their deeply held convictions.  We must permit it, respectfully, if our nation is to survive.

What do you think?