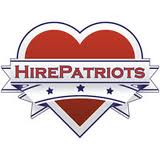 HirePatriots.com began as HireMarines.com in 2005. Our founders lived next door to Camp Pendleton Marine Base in Oceanside. They thought they were semi-retired. They had hired a nephew to run a small carpet cleaning company they created for extra income. They had just purchased a 3-bedroom home. The future looked like a long time to relax and play, when a US Marine, just returned from receiving injuries in Iraq, knocked on their door. He was looking to earn some extra money. And he was desperate. While he was away, his wife had lost her job. Their family car was repossessed, and after a while the utilities were turned off. They had two small children, an infant and a 3-year-old. He had just returned from combat less than an hour before. He was determined to get his family’s utilities turned on again!

Eventhough this wounded US Marine was offered all the money he needed and more immediately, he refused. “Thank you, Ma’am, thank you, sir,” he replied. “I am a US Marine! My honor prevents me from accepting handouts. I sincerely appreciate it, but I must earn it. Do you have any work, repairs, cleaning, or anything else I can do for you?”

A few hours later, after repairing a favorite but broken chair, cleaning the garage, and helping set up a new computer, he left with more than he asked and several plates of hot food, prepared by Tori.

Mark, Tori’s husband, walked the US Marine back to his home and helped him carry the food. “How many other Marines do you know who are also in need of some emergency money?”

“Just everyone I know!” was the emphatic reply.

And then, without a thought before speaking, Mark, our founder, blurted out, “Well, I promise that I will do something about that!” As soon as those words registered in Mark’s brain it responded to hearing Mark’s emphatic promise by asking in a loud voice within his skull, which of course no one else could hear, “Whoa! Why did you say that?!”

After confessing his promise to the Marine to his wife, Tori, they sat down and began to plan. They came up with a free job board for local community residents to use whenever they have chores they need help with around their homes and yards.

Once the website was up and running, Mark and Tori went to the local barbershops where every weekend thousands of Marines were getting their “high and tight” regulation haircuts and gave dozens of HirePatriots biz cards informing the Marines about the jobs available on that site to each barber. The site grew immediately!

People loved meeting US Marines personally. They also appreciated the courtesy and respect that US Marines treated them. Every request was met with a “Yes, sir!” or “Yes, Ma’am.” And they all impressed everyone with their hard work ethic.

That is when our local TV, radio and press decided that we were the big human-interest story for our county! We also received weekly invitations to speak at various kinds of clubs, groups, and associations. Being affiliates of national News companies, soon they began interviewing us too! NBC Evening News and FOX National News had us on and several others. Then, in 2013 People Magazine did a feature about HirePatriots in their “American Heroes Among Us.” — Those media interviews made our little website soar to the top 1% most visited sites in the U.S. and the world for awhile. (See media interviews here: https://hirepatriots.com/in-the-news

Since then, we have used the popularity of the HirePatriots local job board for Military and Veterans as a marketing tool for patriotic businesses. We even written a book on how to get this job board going successfully, “The Patriotic Business Plan.” And we wrote another book, “An American Crisis: Veteran Unemployment,” which became a “best seller.”

And, as we became more and more involved and educated about the realities of military life, we developed additional programs to offer further assistance than just day by day jobs. For instance, there is a 90% divorce rate among combat veterans! So, we host yearly 3- day, all expenses paid Military Marriage Retreats at top ranked resorts. We helped develop a  horse therapy horse program for wounded warriors and their families; began a nationwide entrepreneurial program, US Military Clean; started a free publishing company for US veterans and family members, American Heroes Book Publishing; and, in order for us to financially support our programs, we have a nationwide Car Donation to Veterans program. – These programs can be seen on our 501c3 website, Patriotic Hearts.

How Your Car Donation Helps Heroes

Support for Our US Veterans Is Diminishing! — What You Can Do.

I am an avid user of your site where countless times I have found the means to make it through the month, and I wanted to thank you for it. You created a platform that serves veteran employment needs, and I cant begin to tell you how many times its made a difference not just for me, but for the members of the community I am able to serve again also. ​
-JUAN O​

Hire Patriots is one of the best things ever – benefiting everyone! I am so thankful for your good work.
-CAPRICE HALL

We’ve hired help several times through your site, it has been an excellent resource, and we’ve been thrilled with the guys we’ve hired.
-MEGAN & JEFF

Thanks Mark for all you do to support our military families. My husband deploys to Afghanistan this Friday. We, the family that will be left behind really appreciate people like you, who truly care about the active duty members and the families that are left behind.
-LISA