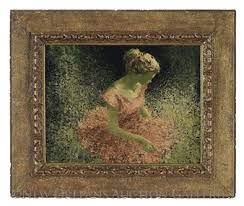 My dad moved us to Laguna Beach in 1961. He had grown up here. His father built several homes here in the 30’s. Laguna was an Art colony when my dad was a kid here, and it was when I grew up here too. And it still is!

He was a palate knife painter. He used flat, thin, bendable blades to apply oil paint to a board. He scraped the paint on and molded it with his knife. One painting required layer upon layer and many thousands of applications of paint. — I think growing up in Laguna had a lot to do with this life choice.

I remember as young boy, my dad would leave early on Saturdays and Sundays from home and went to a busy corner with a large dirt lot and display and sale his paintings there when he got started. He also created calendars for various companies to give to their clients. He must have been in his twenties then. — When I was in 5th grade, he quit his job at an airplane manufacturer as a Technical artist, and he moved us to Laguna Beach. He had decided to throw in all of his chips and to see if he could make a living as a “fine artist.” — He did.

One had to reside in Laguna Beach to show in the Art Festival held in the canyon. (Back then there was only one art festival. It was the original sawdust festival. When they poured concrete, artist who did not qualify to show there began the “Sawdust festival.” down the street.)

The first painting my father sold in Laguna was to Debbie Reynolds, a movie star. She told her friends, and soon my dad was making a very good living as an artist. President Kennedy even purchased one later. — Soon, galleries from across the world were negotiating to hang my father’s paintings too. — He even won the International Art Exhibit 5 years in a row! (After that, they would not allow him to enter again. So he painted in a different style under a pseudonym and won Honorable Mention.)

I am proud of my dad and his talent. But I never really knew him. He was a heavy drinker and got dangerous when he did, which was daily. He never had any friends. He scared them all away. He was a loner. All he seemed to want to do was to paint. And he did. Even when he got palsy in his old age, he was still winning Art contests.

I never had a spits worth of artistic talent. However, in high school at L.B.H.S. I was voted “Most Artistic.” But that was for performing my poetry in the Talent Show. — I became a writer. Like my dad, I am somewhat obsessed and a loner too. There is nothing that gives me more sense of life and purpose than when I am producing good writing. — So, I became an ‘artist’ too. — And coincidentally, my son Saxon, is a dedicated artist too. He lives in Berlin and is growing in fame, worldwide, in multi-media.

It seems to me that many children growing up in Laguna Beach become artists, actors, musicians, dancers, sculpturers, etc. Both my daughter Amy, and my son Sam, are also endowed with artistic talent. It seems to run in our bloodline.

Laguna Beach: Home of the Artist!