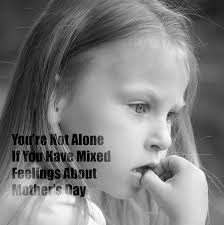 For myself and many like me , we have mixed feelings about Mothers Day.  No doubt many avoid the holiday entirely. They do not call nor send a card. I was like that in my younger days. But as I got older, and I began to learn what life really is, my attitude towards my dad and mother changed.

Because I have raised a daughter, been married most of my life, and been a school teacher to many young girls,  I have learned a few things that made me more forgiving and gave me more understanding and compassion towards my mother.

My mom was raised during the Depression of the 1930’s.  Her teenage years were during World War II. She grew up in a large and very poor family in Texas. He father and mother had never finished high school and could survive only by menial labor, in which all of the kids often had to participate: like picking cotton, which my mother found to be humiliating, and was teased about at school.

But when the war happened, the family moved to California, where defense plants and new military bases were being built rapidly. They moved to San Juan Capistrano, next to Camp Pendleton Marine Base, which was undergoing tremendous development. Her father found work and good wages. And my mom worked at a popular pie shop and had the attention of young Marines and sailors all day and night.

My mother was very thin, and tall. She looked a lot like the actress Lauren Bacall, who married Humphrey Bogart.  This was at a time before television. Everyone, especially teenagers went to the movies. And millions of them dreamed of someday being a star of the screen too. My mother was one of them.

Unfortunately, she had a teenage pregnancy when she was 17, and my older sister was born. She married someone besides the father. That man became mine. His dream was to be a famous artist. And my mother and father pursued those dreams relentlessly. It was the very most important desire in their lives. My dad eventually fulfilled his dream and became world famous for his palette knife paintings.  My mother did not. I think she blamed it on me.

For some reason, a lot of attention was devoted to my sisters; but, no matter how much I achieved, they were always extremely angry at me. My dad was dangerous, especially when drunk. My mom on the other hand, did her duty for the family. We had a nice home and she always cooked great dinners. She was sober until I was ten. My father never was. Eventually, she caved in and began drinking too, as heavily as my father. That is when I lost her completely. — Many years later, when I had a family of my own, my mom got sober and stayed that way for almost 30 years, until she died. But we were never very close.

It did not help that my adolescence was spent during the later half of the 1960’s, when 60 % of America was below the age of 21.  We loved Rock& Roll, opposed the Vietnam War, hated the “fuzz” (police), and smoked “pot.” All of these thing wildly infuriated our parents’ and grandparents’ generations. There was huge rift between us. It was a generational war.

I was a studious kid, and an accomplished athlete. I was heading to Stanford University on a scholarship. My dream was to become a renowned historian of American history. I also wanted a degree in Comparative Literature, because I wanted to be a published author too. I even began taking college classes while still going to high school. I also always had a job. I was a busboy, dishwasher, janitor, and an usher at the movie theater. – I also had a weekly column in our town’s newspaper. The Editor was liberal and allowed me to write from the point of view of my generation. I infuriated many “adults” in our town, as I became the “face” of the “hippie, pot-heads,” as they called my generation. The police harassed me, the teachers began giving me failing grades for the work they once had given me A’s for; and, no coach at school would allow me to join any team. But it is my mother is who nailed the last peg in my coffin.

It was at this time that our town held a large community meeting to address the “drug epidemic” among our city’s youth. Everyone showed up, young and old. Our town’s preeminent doctor stood up and began saying ridiculous falsehoods, like “Smoking Marijuana destroys chromosomes and causes deformed babies to be born.” I stood up and publicly opposed him. – That is when my mother, who I did not know was in the crowd, stood up and interrupted me in a high, shrill, angry voice that everyone could clearly hear: “That is my son! He is a drug addict! I think he probably sells drugs too!” – None of this was true, In fact, I had quit pot for mediation by this time. Nonetheless, the dye was cast. I became a persona non gratis immediately. I could not get a job, or get a date.  And my high school vice-principal called me into his office and plainly told me that I would never be allowed to graduate. I was put into permanent suspension. And so I dropped out. And my life was irreparably altered.

I rarely ever saw my parents after that. I hitch-hiked around, had a lot of fun, and then got married and had a child of my own, well before I should have. – Eventually, I found my place in the world; but, I never became a college professor, nor an historian. My life was a hard struggle for many years. It took me until I was 30 before I got my high school and college degrees. I also had to deal with becoming an alcoholic myself. I also developed anger issues like my father exhibited.  And throughout most my life I could not believe that anyone loved me, which made long-lasting relationships impossible.

But I no longer blame my dad and my mom for their behavior. I stopped doing that in my late 30’s. I am 66 now, so it has been a long time. I understand that I am as broken as they were. I inherited problems from them; but, they no doubt inherited problems from their parents during their youth too.  So how far back would I need to go in the preceding generations? Probably back to Adam and Eve.

I now love my mother and father. I was never close to them. We never really knew eachother.  We obviously hurt eachother. So I have really no one to blame. Life takes its own course. We are who we are. We become who we are meant to be, it seems, regardless of our upbringing. – I love them solely because I should. God says to “Honor your Father and Mother.” He never said, “only if they are really great parents.” He also says that if we desire to become “children of God” we must “Forgive those that hurt you. Do good to them, and pray for them.” – When I was finally able to do this, is when my hard heart broke and was filled instead with empathy, compassion and love for those who gave me life.

When my mother died, I was there. I sang songs to her and played my harmonica. I held her and kissed her. Then they gave her a shot and she passed quietly. I cried. – I forgive her, just as I forgive myself. She was my Mother.  She always will be.