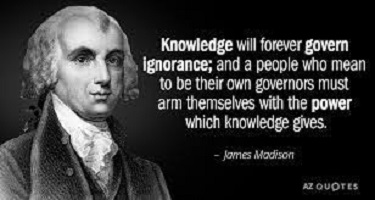 “Ignorance more frequently begets more confidence than it does knowledge. This has been proven time and again by tests. It is those who know little that doubt scientific knowledge the most.”

Sometimes, the news of our days gets me down. In those times, these are my thoughts. Do you have them too?

Across the world we are experiencing a growth of ignorance. Our education system has failed us. The very basics of logical thought and deduction are now comprehended by only a minority of our population. It is such ignorance that leads to fanaticism, and dangerous extremism. – Unfortunately, studies also show that such people are so extremely confident about their ‘intelligence,’ and have such an elevated estimation of themselves, that they are almost totally impervious to being told facts that disagree with their false assumptions! And when they can gather with crowds of people who are similarly ignorant, it cements their commitment to believing error, rather than truth. It is a form of mass hysteria.

As time progresses, we will have fewer and fewer intelligent, logical, truth-seeking individuals. This will create social and political chaos, such as we are beginning to see now. And just as fact-based people are being maligned and threatened today, it will increase until we are silenced.

I was a public-school teacher in Los Angeles. My classes had 60+ students in each. (There is no way a teacher can effectively teach that many students at once.) And I was given no textbooks. I was even told by my principal, “The most important job that you have is taking role. That is how we are paid.” – And it was explained to me that in South Central Los Angeles kids came to school not to learn but to get a free lunch, and to be safe during the day. – It was as if the Los Angeles school district had given up on teaching. And so, I am not surprised that kids graduating from high school today know about as much as a 5th grader in the 50s and 60s.

We have significant critical issues facing our world today. Intelligent, science-based solutions must be adopted immediately! But this has been said for decades and the changes that must be taken immediately have not happened and they will not. – Only those, like ostriches, with their heads stuck in the sand, are not terrified about our present and our future!

The prophet Isaiah saw the future and the world we live in now, in the “last days.” This is what he prophesied, “Doom to you who call evil good and good evil, who put darkness in place of light and light in place of darkness, who substitute bitter for sweet and sweet for bitter!” (Isaiah 5:20)

We are in for some very hard times. Jesus said about this time, “There will be greater anguish during that period than at any time since the world began. And it will never be so great again.” (Matthew 24:21) But the Prophet Isaiah also promised that after this time the Messiah will return to earth and establish his kingdom. And that is my hope, especially when all seems hopeless. — “Look, a righteous king is coming! And honest princes will rule under him…until at last the Spirit is poured out on us from heaven. Then the wilderness will become a fertile field, and the fertile field will yield bountiful crops. Justice will rule in the wilderness and righteousness in the fertile field. And this righteousness will bring peace. Yes, it will bring quietness and confidence forever. My people will live in safety, quietly at home. They will be at rest.” (Isaiah 32:1,15-18)