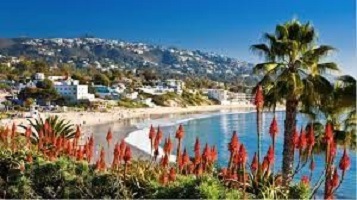 In early 1960, my father moved us from our 3 stories home in Silverado to Laguna Beach, where he grew up. His father was a real estate investor and had purchased several plots of land in Laguna and built large homes on them, in the 1920’s. My grandmother was now a widow, but she earned income still from these properties. She moved in with us on Cress St. near the top, where the grove of Eucalyptus is. This was a 3 story house that stretched down in back to the steep, overgrown ravine, where there is now a tennis court. I built a tree fort in that grove. I used the wood and nails from the house that was being built next door.

I was a great tree fort builder. I had built several in Silverado. Besides exploring the myriads of abandoned Gold mines hidden in the hills, and walking up the creek jumping from stone to stone looking for crawdads, or hanging ropes from trees near houses so that we could swing from roof to roof, we built forts.

My tree fort on Cress had steps to the deck of the fort, where I could keep a look out for ‘bad guys.’ Then I built a 10X10 room, with a 6’ ceiling, and a large picture window looking over the ravine. – That fort lasted well beyond after we moved from Cress to Holly St. In fact, one day at Oak St, when I was body surfing the two boys who moved in next door to that fort, came up and thank me and told me stories about what they had done playing in the fort. – It was torn down by the city when they built the Tennis courts.

My next home was previous lived in by the Boyd family. The names of all their children were memorialized in the cement patio behind the house. Mr. Boyd owned a restaurant on the Coast Hwy. And one of his sons bought the Marine Room. His sister, Cindy, was in my class. – Unfortunately, that beautiful house was a nightmare for me. My father’s alcoholism and violent rages got so bad that he sometimes he kicked down my bedroom door with a knife in his hands! He threw my sister off a second story balcony! And sometimes our living room furniture was thrown through our big window looking out to our front yard! – I ran away when I was 13.

Fortunately, there were some good people in town who knew me and took me in. But eventually, with two friends, Brandt Davis and Randy Smith, I built another fort. This one was underground. It became my home. It had 3 bedrooms, and a living room. – It was built inside of a ravine facing the ocean. It was up high enough to see the moon on the water. – And by stretching an electric line from my fort to a neighbor’s outdoor outlet (at night), I had electricity, lights, and music. I also had running water from a Beer keg placed above the kitchen sink.  – Sometimes for $$$ I would rent the fort out to seniors at school who wanted to use it as a make-out place.

My favorite home in Laguna was my little yellow cabin with white trim that I painted. It was at the very tip top of 8th St. on 5 acres of virgin land. I rented it from a senior citizen who lived in Leisure World. I could see from long Beach to the tip of Dana Point from my window. My rent was $20 a month, including utilities! The house next door to me was available and so I got friends I knew from teaching Transcendental Meditation in next door. We had a serene and lovely time there.

I also had a 2-bedroom home on Monterey, above Heisler Park. That is where my first child was born, when I worked for the water district.

Since then, I have lived in a variety of apartments. My favorite has always been the Ocean House above the main Beach.

I love my hometown. It is certainly one of the most beautiful places in the world! And although the citizens are no longer middle class, it still has an artsy atmosphere and those small town vibes.