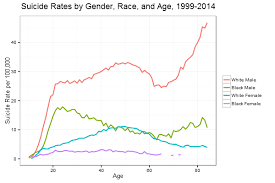 It has to do with the world those white males live in now. It is not the same world as they grew up in during the 1950’s to late 1960’s. Today, everything is upside down to many of them. The role of men and women, coupled with the inability to financially support their families means that these men cannot live up to their expectations, and the standard of living provided by their fathers’ generation. Older white males in the U.S. today lives are unfulfilled and devoid of purpose. They are being swallowed up in a mire of despair.

It is associated with the fall of the middle class and the hope of prosperity, living a life lacking fulfillment and purpose. When the men of this generation grew up in the 1950’s and 1960’s, American economic growth ‘democratized prosperity.’ There has been no wage growth in America since that generation. In this millennia we have managed to ‘democratize financial insecurity.’ A consequence is that in many cities and towns 30%+ of the calls police respond to are for white males threatening to kill themselves!

Another contributing factor in the rising rate is the Great Recession that hit 11 years ago. A 2017 study in the journal Social Science and Medicine showed evidence that a rise in the foreclosure rate during that concussive downturn was associated with an increase in suicide rates. The increase was higher for white males than any other race or gender group,

Interestingly, African-American suicides have declined and are considerably lower than whites. Reasons are thought to include better coping skills when negative things occur as well as different cultural norms with respect to taking your own life. Also, Blacks and Hispanics tend to have stronger family support, community support and church support to carry them through these rough times.

While money woes definitely contribute to stress and poor mental health, it can be devastating to those already prone to depression — and depression is indeed still the number one risk factor for suicide. A person with no hope and nowhere to go, can now easily turn to their prescription painkiller and overdose, bringing the pain, stress and worry to an end. In fact, prescription painkillers were the third leading cause of suicide (and rising rapidly) for middle aged Americans in the 2000’s.

In 2016, 47% of Americans say that they could not come up with $400 cash in an emergency without borrowing it, or selling something. The average American family has only 3 days to a maximum of 3 weeks’ worth of savings if they became unemployed or faced a financial emergency.

To struggle financially is a source of shame, a daily humiliation—even a form of social suicide. Silence is the only protection. This is experienced by millions of Americans, and not just the poorest among us, who, by definition, struggle to make ends meet. It is happening to middle-class professionals and even to those in the upper class. Many of us are living in a more or less continual state of financial peril. A majority of Americans are on thin ice financially.

A report published last year by the Pew Charitable Trusts found that 71 percent of Americans are concerned about having enough money to cover everyday expenses. Median net worth has declined steeply in the past generation—down 85.3 percent from 1983 to 2013. According to research funded by the Russell Sage Foundation, the inflation-adjusted net worth of the typical household was $87,992 in 2003. By 2013, it had declined to $54,500, a 38 percent drop! And nearly half of college graduates claim that they could not cover a car repair or emergency-room visit through savings.

Older white men whose generation saw John and Robert Kennedy, Martin Luther King, Gandhi, and their assassinations; the Vietnam War, the advent of “Pill,” a “sexual liberation” for women, the reversal of social mores and customs that they were raised to respect, as well as the demise of the American Dream, many experience severe depression and despair. Such men may be keeping their suicidal thoughts and attempts from their wives or loved ones. Being open about personal feelings is not a ‘manly” trait to them. Consequently, their suicides are frequently a complete surprise to those who love them and those with whom they associate.

Patriotic Hearts, a honored and respected non-profit, is adding a suicide prevention program, The Tree of Healing, that specifically addresses this epidemic later this month. Our counselors are US veterans who are certified to counsel potential suicide victims, including civilians, this month. And we will be offering a certification course to train others to become suicide prevention counselors too.

P.S. Here is a video that also might shed light on this issue from a Black man’s perspective: