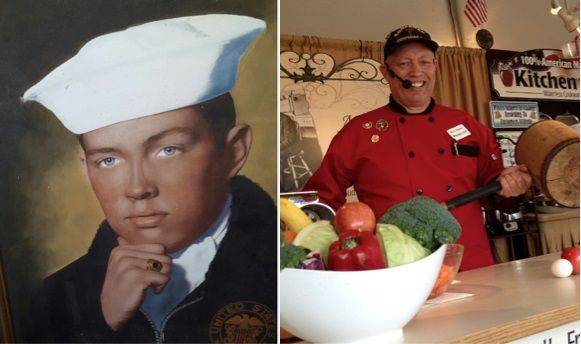 Kitchen Craft is an American company that is seeking US veterans to become business representatives of their products. It is an opportunity for US veterans that enjoy being on stage and engaging other people. You go to various venues and set up a fantastic Kitchen Craft booth. Then you show the value of cooking with their kitchenware by demonstrating it. You will be a showman that performs and sells at the same time. Watch the video below.

Here is a letter I just received from a US veteran that is a Kitchen Craft representative and loves it:

“I am one of those people who enjoyed my career in the military very much.  I joined the Navy in 1976 in the Cardinal Company.  We were given that name because we were sworn in at Busch Stadium where the St. Louis Cardinals play baseball.

I attended a dental tech school and graduated first in my class. I was then sent to Great Lakes, Illinois where I worked in the Oral Surgery Department at the Great Lakes Navel Boot Camp for the next three years. When my tenure was up there, I was sent to Fleet Marine School, where I received Marine training for Medics in the Navy.  I then transferred over to the Marines and worked at Camp Lejeune in North Carolina.

I enjoyed what I did so much, I was going to make the military my career for the next 20 years.  Unfortunately, I had a son born with an ailment that the military couldn’t take care of, so I left the military at that time. I have been with Kitchen Craft ever since leaving the military; which has been more than 25 years now.  My military experience has been a great advantage with my Kitchen Craft career because it has helped me stay focused, and I always seem to fall back on my military training when I teach others.

I highly recommend anyone, with a past military history, that is looking for a great career give Kitchen Craft a chance. It has certainly given me a great career – the chance to travel the country, meet new people, see new places and last, but not least, the financial reward that I truly deserve. I proudly wear my Navy or Marine hat and am warmly received in all the cities and communities I travel to for Kitchen Craft.

If I had to do this life all over again, I would not hesitate to put my name on the dotted line for our country.  And, of course, share my abilities with others on the Kitchen Craft team.”